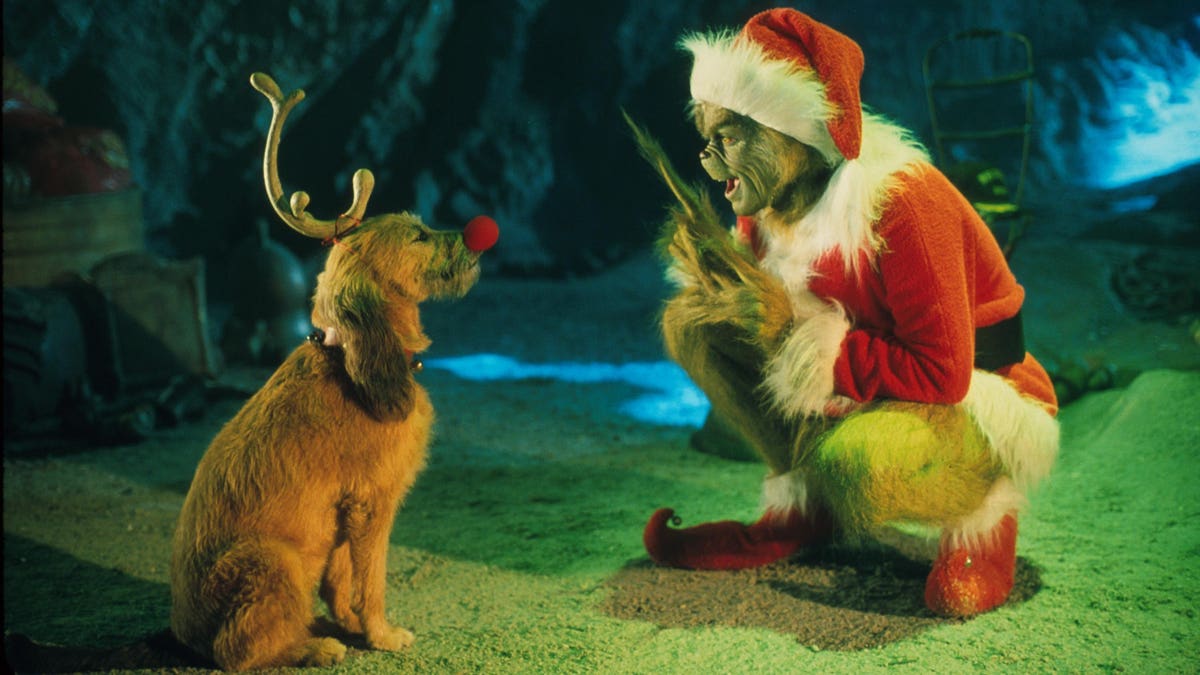 Universal’s The Grinch, directed by Ron Howard and starring Jim Carrey, may just be one of the worst films ever associated with those three respective filmmakers. Ironically, I would argue it contains one of Jim Carrey’s best comic performances, in that he was utterly unrecognizable in body and soul and leaned into the drama as much as allowed. As for Howard, whose not-great Hillbilly Elegy debuts on Netflix
today, he has made so many movies of all size and scope that he’s bound to miss now and then. But The Grinch is also one of Carrey and Howard’s biggest domestic and global box office successes. The blockbuster 2000 holiday hit stands out as an ahead-of-its-time example of what is now the definitive recipe for theatrical success: It featured a massive movie star playing an incredibly popular marquee character, which meant it didn’t matter if the movie was any good.

In that sense, How The Grinch Stole Christmas (normally just referred to as “The Grinch”) was a unique blockbuster package. It starred one of the biggest movie stars in Hollywood, one Jim Carrey, as the Grinch, one of the more recognizable and beloved family-friendly fantasy characters in pop culture. We can debate whether Kevin Costner playing Robin Hood in Prince of Thieves following Field of Dreams and Dances with Wolves qualifies, but that’s probably the only comparison where the star and IP may have been on equal ground. Ditto Batman, of course, even if Michael Keaton was never as “big” as Costner or Carrey and Nicholson (who played The Joker) was a star back before opening weekends were “a thing.” The Grinch would arrive in November 2000, six years after Carrey became an overnight Hollywood sensation via three comic smash hits.

After years on In Living Color, he arrived as a bankable “face on the poster” movie star thanks to his triple whammy of 1994, namely Ace Ventura: Pet Detective ($107 million worldwide), The Mask ($350 million) and Dumb & Dumber ($247 million). He would follow that up with a supporting role in Batman Forever as Edward Nygma/The Riddler which would help push Joel Schumacher’s action superhero sequel to a then-record $53 million opening. And 25 years ago this month, he would open Ace Ventura: When Nature Calls to an eye-popping $38 million all by himself, an early example of a breakout comedy sequel and the biggest non-summer opening ever at the time. It would earn $212 million worldwide, and the next four years would have their ups (Liar Liar, The Truman Show) and downs (The Cable Guy, Man on the Moon).

Nonetheless, despite mixed reviews, the allure of Jim Carrey AS The Grinch in a live-action revamp of a beloved book/animated special was an unbeatable combo. The first teaser (which debuted with Mission: Impossible II in May of 2000), which almost played like a horror film, didn’t hurt although the trailer was more standard kiddie fare. The film earned $55.082 million over its debut weekend. That was a 3.53x weekend multiplier (that’s good, even for a kid flick) and the fifth-biggest opening weekend and the biggest for a non-sequel at the time (that’s better). Oh, and propelled by solid word-of-mouth, it would earn another $52 million in its second Fri-Sun weekend, scoring a bigger second-weekend gross than The Phantom Menace ($51 million from a $64 million launch). It would earn $73 million over the Wed-Sun Thanksgiving weekend and would drop by just 5.4%.

There was one November release that was unbreakable that holiday week, and it wasn’t M. Night Shyamalan’s Unbreakable (or Disney’s 102 Dalmatians). It was a (Christmas) miracle, cause Grinches are strong as hell. It would gross $260 million domestic and $345 million worldwide. Yes, most Christmas hits A) open in November and B) make most of their money in North America. It also started a trend of Thanksgiving weekend being dominated not by the big opener but by the mega-movie which had opened the weekend prior. See also: Harry Potter (2001, 2005 and 2010), The Twilight Saga (2009, 2011 and 2012), The Hunger Games (2013, 2014 and 2015), Die Another Day in 2002, National Treasure in 2003, The Cat in the Hat in 2004, Happy Feet in 2006 and obviously Frozen II (last year’s big YA franchise title and family-friendly animated biggie).

I distinctly remember opening weekend amid a packed audience, as the Grinch and Taylor Momsen’s Cindy Lou Who happily barreled down the mountain on a gift-packed sled toward Whoville, that I was watching a snapshot of the future. It was a live-action IP cash-in, one where whether or not it was a good movie was almost entirely beside the point because it was a big-budget reimagination featuring a massively popular movie star playing a massively popular marquee character. Universal and Imagine could turn a picture-book (or 25-minute animated special) into a 100-minute movie, with the first two acts compromised entirely of padding and “origin story” content, and audiences showed up because it was Jim Carrey AS the Grinch! 20 years later, marquee characters are the biggest driving force to get folks into movie theaters while movie stars are less important than ever.

The notion of a marquee character matters more than star power, IP interest or brand awareness. Audiences flocked to Harry Potter to cheer for Harry, Hermione and Ron. They thrilled to Bohemian Rhapsody because it was a rock-n-roll Freddie Mercury biopic. Joker was a monster hit last year mostly because it was a Joker movie. That’s one big reason comic book superhero movies now rule the multiplex, because audience want to see movies about Aquaman and Spider-Man in a way they don’t about King Arthur or Han Solo. Sometimes the actor “matters,” as with Tom Hardy’s Venom and (eventually) Hugh Jackman’s Wolverine and Jennifer Lawrence’s Katniss Everdeen. Star power still helps, but only in a “Angelina Jolie IS Maleficent!” or “Robert Downey Jr. IS Iron Man!” combo deal. Audiences who thrilled to Star Trek will still ignore Hell or High Water.

2000 feels like the last year where star power was key. Tom Cruise’s Mission: Impossible II would top globally ($546 million). Mel Gibson’s What Women Want would earn $374 million while Tom Hanks’ Cast Away would earn $429 million.  By next year, Harry Potter and the Sorcerer’s Stone, The Lord of the Rings: The Fellowship of the Ring and Shrek would officially launch a new era of IP over actors, with Spider-Man, Pirates of the Caribbean and Transformers following in kind over the next few years. But for one last time, a huge movie star (Jim Carrey) as a beloved pop culture figure (The Grinch) was enough to make Universal’s How the Grinch Stole Christmas (from a marquee director no less) into the year’s biggest domestic blockbuster. That it scored in spite of its mediocrity now seems to be its most prescient quality.