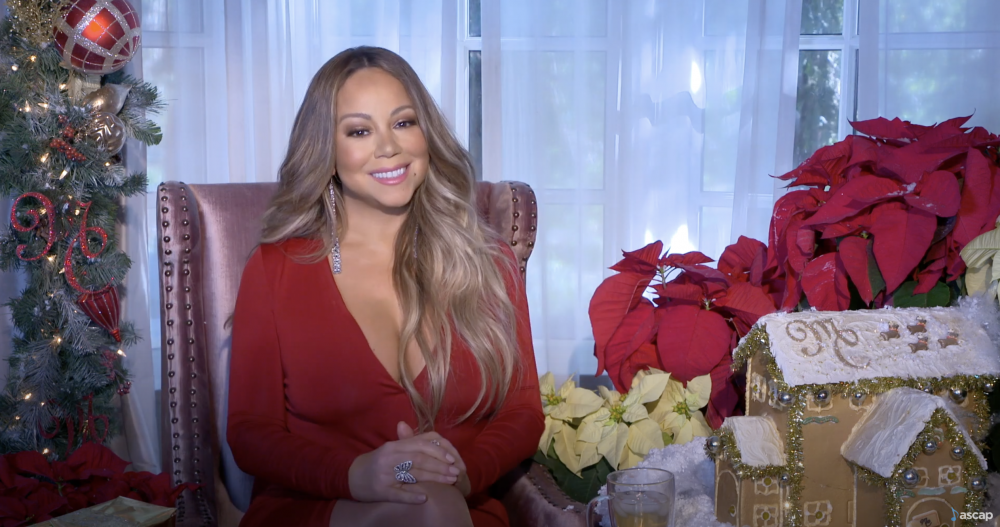 In what may be a late-breaking contender for the least shocking news of 2020, this year’s most-played holiday song so far is, per ASCAP, Mariah Carey’s “All I Want for Christmas Is You,” the single that finally went to No. 1 on the pop charts last year after 25 years in wait. Carey recorded a video message in celebration of the ASCAP honor (see below).

If that seems like something that happens every year, though, think again: When ASCAP released its annual rankings last year at this time, “All I Want for Christmas” was all the way down at No. 3. Last year’s topper? “It’s Beginning to Look a Lot Like Christmas,” penned in 1951 by Meredith Willson, of “The Music Man” fame. (ASCAP’s lists are tallied by the song itself, not by performer, so multiple versions of the Willson chestnut would have figured into its ranking.)

This year, “It’s Beginning to Look a Lot Like Christmas” gets bumped just one slot, to second place. That song will probably always have a slight advantage because ASCAP gathers date for its list from airplay and streaming that come in August through November, and radio stations doing an early flip to an all-Christmas format are naturally going to favor a tune that heralds the arrival of the season; “It’s Beginning…” is less likely to be getting play on Christmas Eve. Still, the venerability of the nearly 70-year-old song is surprising.

The Carey song, which is more of a behemoth than chestnut at this point — and was cowritten by the singer with estranged former writing parter Walter Afanasieff — is a near-anomaly on ASCAP’s top 25 list, by virtue of having been introduced into the Christmas lexicon at some point since the JFK administration. The ASCAP list shows once again that the public favors material from the golden age of Christmas pop, no matter who’s doing the singing, with a few rare exceptions.

Ariana Grande is one of those exceptions. Her “Santa Tell Me,” co-written with Savan Kotecha for a 2013 holiday EP, squeaks onto the ASCAP chart this year at No. 25. That means there are two songs written in the 21st century on the chart, as opposed to just one in 2019. It joins the other modern inclusion, Kelly Clarkson’s “Underneath the Tree,” also from 2013, which the singer co-wrote for her Christmas album that year with hit producer Greg Kurstin. Last year the Clarkson song was at No. 23, and it repeats in that spot in 2020.

Looking at the list, it’s easy to see that the prime era for the writing of Christmas classics was 1934 — when both “Santa Claus Is Comin’ to Town” and “Winter Wonderland” were copyrighted — through the early ’60s, which saw the dawn of the “A Holly Jolly Christmas” (currently holding at No. 3) in ’62 and “It’s the Most Wonderful Time of the Year” in ’63. After that, only a few outliers are seen in the pantheon: 1970’s “Feliz Navidad,” now celebrating its 50th anniversary, Wham’s “Last Christmas” in ’84, the Carey song in ’94, and then a nearly two-decade leap before the aforementioned Clarkson and Grande tunes.

There isn’t a huge amount of shakeup on the chart this year. One song that’s a reentry this year after previously being absent is “Happy Holiday/The Holiday Season,” from 1942’s “Holiday Inn,” the only film to have two original songs on the chart, the other of course being the Oscar-winning “White Christmas.”

Dropping off the list this year, somewhat surprisingly, is last year’s No. 25, “Blue Christmas.” Maybe during the pandemic, listeners are too busy being blue to want to hear about it for a couple of months or more on end. Taking its place at No. 24 is the reentry of a more playful Christmas downer, “You’re a Mean One, Mr. Grinch.”

ASCAP’s chart does not include songs whose writer or writers are solely signatories to BMI, SESAC or other competing PROs.