Annika Stelling and Aylah Tepper are two of the kindest, most respectful and helpful fourth graders in Brittany Lemaniak’s class at EP Rock Elementary School.

When Stelling had the idea to create a school newspaper for their class last fall, she, along with Tepper, collaborated to come up with the different sections for the newspaper.

“The Lemaniak Leader Times” has a little introduction section that is followed by things like breaking news, upcoming events, birthdays, updates, no school days and more.

The February edition of the “Lemaniak Leader Times” featured an interview with the Hudson mayoral candidates. 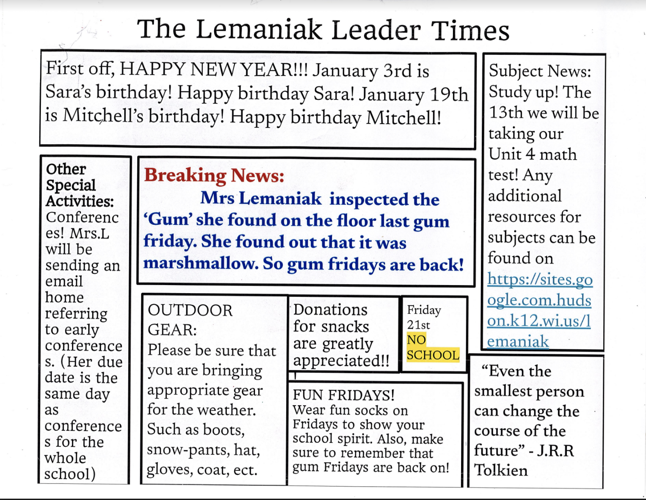 The January edition of the “Lemaniak Leader Times” featured a story about marshmallow on the floor mistaken for gum. 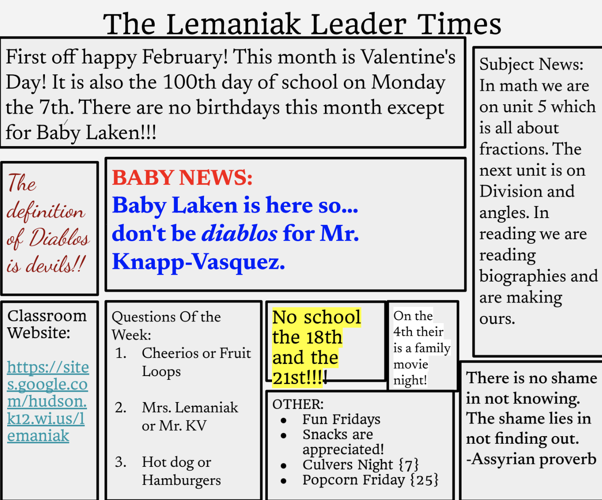 The February edition of the “Lemaniak Leader Times” featured an interview with the Hudson mayoral candidates.

The January edition of the “Lemaniak Leader Times” featured a story about marshmallow on the floor mistaken for gum.

This well-rounded press is presented to the class monthly and is created completely by Stelling and Tepper, who “published” their first issue in January.

“Everything they do, they do with so much passion,” Lemaniak said. “They’re rock star leaders.”

Q. Why do you want to be mayor again?

A. I like working and helping for people in the people and the community and making our community a better place in which we live

Q. What has been your biggest accomplishment as current Mayor?

A. Getting better ambulance service (getting people to the hospital faster) adding more police to keep people safe, bringing development to the old dog track, keeping taxes down, and leading the community through the tough past 2 years.

Q. What will you do if you become mayor again?

A. My number 1 priority is safety welfare of the people in our city. Permanent finding solution for library. Transportation for elderly and disabled. And bringing additional opportunity for a recreation especially at Lakefront Park.

A. I love Hudson and I believe in more women leadership roles and I want to bring everyone together.

Q. Why do you think you would be a good mayor?

Q. What are your propositions?

A. My propositions are a youth climate council and helping the environment.

Stelling and Tepper are not provided class time to work on “The Lemaniak Leader Times,” so they find time when they can. Often, that’s after they’ve completed their work or during recess.

“The girls wanted to start a newspaper so the class could have something to look forward to each month,” Lemaniak said.

When asked about some of the stories they’ve done, Stelling and Tepper explained the gum incident.

There is a strict gum policy in Lemaniak’s classroom. On Friday’s, Lemaniak’s students can chew gum, but if it is ever found anywhere other than the trash can, “Gum Fridays” will cease to exist.

One day, what appeared to be gum, was found on the floor.

After closer examination by a school janitor, it was discovered the gum was actually not gum, but a marshmallow the class had used before winter break during minute-to-win-it games.

Stelling and Tepper were the first on the story, breaking the news that “Gum Fridays” were back in Lemaniak’s classroom.

Other stories the two have pursued include interviewing Mayor Rich O’Connor and mayoral candidate Liz Malanaphy. Malanaphy works at EP Rock. The girls found the perfect time and place to interview her – the playground at recess.

Though journalism isn’t either of their dream jobs, Stelling and Tepper still have aspirations. Tepper wants to be a pediatrician when she grows up, and Stelling wants to be a criminal lawyer on her way to becoming the president of the United States.