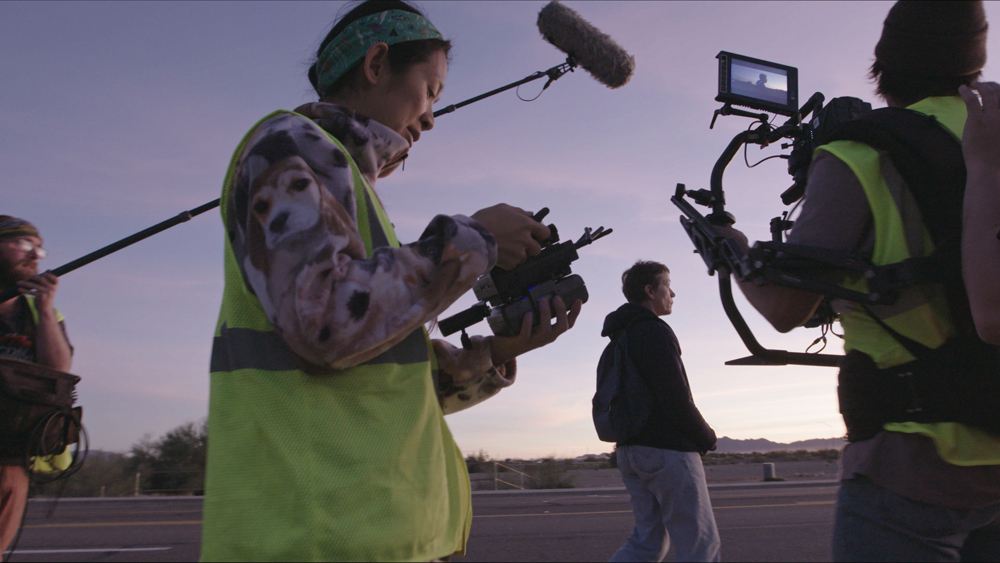 Critically-acclaimed director Chloe Zhao’s latest film, “Nomadland,” became an early Oscar favorite after bowing at the Venice Film Festival earlier this year, and could see her make history as the first Asian American female to win the best director prize.

The film stars Frances McDormand as Fern, a widow who has been left houseless after the gypsum mine that had propped up the town of Empire closes for good. Fern lives and travels through America in her white van, encountering other real-life nomads on her journey. Zhao spoke to Variety’s Awards Circuit Podcast about “Nomadland,” listen below!

Zhao, the critically-acclaimed director behind “The Rider” and “Songs my Brothers Taught Me,” says she had “always wanted to make a road movie,” especially one that looked at the American West. Her new film is based on the nonfiction book “Nomadland: Surviving America in the Twenty-First Century” by Jessica Bruder, and Zhao says she was drawn to the way Bruder documents the daily in and outs of nomadic life.

“Fern is a fictional character,” says Zhao. She wanted to find a way to thread Swankie and May from the book together, and Fern was the way to do it.

When McDormand won best female lead for “Three Billboards Outside Ebbing, Missouri” at the 2018 Independent Spirit Awards, the actress gave Zhao a subtle shoutout as one of her “new friends.” Zhao jokes the two had already started discussing the film, having met for the first time right before the awards. “I think we really hit it off. We had a long day brainstorming. When she said, ‘Chloe,’ there could have been many Chloes there,” Zhao says.

Swankie was discovered by Zhao when she drove to May’s land. “Swankie just happened to be there,” Zhao says. “When I went to Colorado, I met her at the parking lot of Planet Fitness and we spent a lot of time together. That story was one of the first things she told me, and it ended up being in the film.”

Zhao, who has captured the vast American landscape before in her films, says she has experienced rattlesnakes and tornadoes in the past: “We can get used to anything, I can be pulling ticks off my face and I don’t even blink.”

With the film’s themes of unemployment, displacement and moving cross country because of the coronavirus pandemic, “Nomadland” resonates deeply with these times. Zhao says a fellow director told her how he appreciated the small things: “‘I just love watching her doing laundry,’” she quotes. “‘I just love watching her making breakfast because those are the things that I didn’t think mattered. Now in the morning, I wake up and make breakfast and do laundry, I accomplished something today.’”

She adds, “There was a time when chopped wood and carrying water was enough. There’s something about the little triumphs that we take for granted and we are forced to slow down and acknowledge it.”

While making “Nomadland,” Zhao was juggling Marvel’s “The Eternals.” She jokes she might have mixed up the rebels in “Nomadland” and “The Eternals” once or twice. “It’s been beneficial to work on these two films together, sometimes you get so locked into one thing, so it’s been really nice to force yourself to step out and come back and say, ‘Okay’. Creatively, it’s been nice to great to keep each other in check.”

Zhao also still finds time to write fan fiction. Which canon? She won’t reveal. She does admit she used to write on Livejournal, an old blogging site, and has dabbled in fanfiction.net. But, she cautions, “Never reveal your pen name. Many people ask me, but you will never find out.”

Also in the show, a conversation with Broadway veteran Ariana DeBose, now the star of Netflix’s “The Prom.” But first, our awards roundtable asks, how many best picture nominations can Netflix get?

Variety’s “Awards Circuit” podcast, hosted by Clayton Davis, Jenelle Riley, Jazz Tangcay and Michael Schneider (who produces), is your one-stop listen for lively conversations about the best in film and television. Each week “Awards Circuit” features interviews with top film and TV talent and creatives; discussions and debates about awards races and industry headlines; and much, much more. Subscribe via Apple Podcasts, Stitcher, Spotify or anywhere you download podcasts. New episodes post every Thursday.