Radio DJ Ron Gerber, who currently hosts the show every Friday night on KFAI, started it when he was in college.

MINNEAPOLIS — When darkness falls in Minneapolis every Friday night, if you tune your radio just right, you just might hear the boogiemonster. Ron “Boogiemonster” Gerber, that is.

Gerber is the radio DJ behind Minneapolis community radio station KFAI‘s longest-running show, Crap From the Past. The uniquely named show airs every Friday night from 10:00 p.m. to midnight. In January of this year, it hit its 30-year anniversary.

KARE 11’s Eva Andersen sat down with Gerber who shared what all goes into creating a show with such longevity.

Eva Andersen: How would you describe Crap from the Past?

Ron Gerber: It is a graduate-level course in pop, which is what I say on there. It’s a pop music radio show that plays older pop – been around since 1992. And really we aim at people who have been listening to radio for 40 years.

If you were around in the ’80s and you listen to radio, you’re my target audience. Basically, you’re me.

Andersen: Can you elaborate a little bit more on what you mean by ‘graduate-level course in pop’?

Gerber: I aim for people who know quite a bit about pop music already. So if you’re new to pop, and you hear about the show, you’re welcome with open arms. But if you know lots and lots about pop, I’m going to challenge you with stuff you don’t know.

I’m going to wrap [songs] in a context that you can relate them back to something that you already know. For example, if I play some obscure B-side by Duran Duran, I’ll give you context and say, well here’s the A-side, but I bet you’ve never heard the B-side.

Or Peter Gabriel singing this particular song in German. There are a lot of examples, but I’m going to challenge you in a way that other radio shows would never do. Nobody in his right mind at a commercial station that is fighting for ratings is gonna play B-sides or stuff recorded in foreign languages, or a lot of the staples that I like to play.

Andersen: So do you ever play music that is actual crap?

I like bad singing. I’ll play bad singing on the air. It’s like dessert. You couldn’t make a whole dinner out of dessert.

Behind the mic with KFAI radio host Ron Gerber 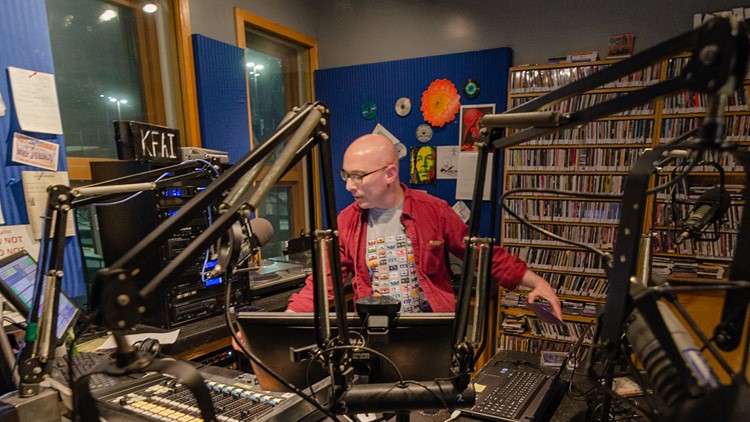 Andersen: How did the show get its start?

Gerber: I thought, I’m going back to my old college radio station and I’m going to pitch them a show called Crap from the Past. And see what happens. At the time, I sort of had the itch to play things that I didn’t hear on the air.

My old college radio station put me on from I think it was four to six in the afternoons on Wednesday…or Friday, I can’t remember.

I was playing to an audience that was slightly younger than me because I was in grad school at the time, so I was playing to the undergrads, playing music that was slightly older than what they know. Just a little bit. Because I felt that music from 1983 was better than the music from 1992. So I started playing hits that were 9, 10 years old. And it took off, it was huge.

By April, it was 100% requests, and the request line would light up before I got to the station.

By May, by the time the semester ended, they said that there was one particular dorm where you could walk through the dorm and hear it playing in enough dorm rooms where you could continuously hear the show playing wherever you went in the dorm. It did well.

Andersen: How much of your time goes into consuming all of this music?

Andersen: How do you prepare for a show?

Gerber: There’s a lot of improvising that goes on.

I have enough knowledge up here just from being a music nut since I was 10…I can pull things out of a hat that I can surprise myself sometimes.

There was one thing when I was playing stuff about hands. And I came up with Slow Hand by the Pointer Sisters and Hands to Heaven by Breathe, Keep your Hands to yourself…the part that I was able to come up with on the fly is all of those peaked at No. 2 on the Hot Hundred. I was pretty pleased with that! That’s just something I know – some useless piece of information that’s lodged in there.

Andersen: It’s obviously been a huge time commitment. Was there ever a point when it was really difficult to keep the show going?

Gerber: Year No. 19. I thought, ‘What am I doing? This is every Friday night, it’s exhausting!’ And I let leak to one or two people like, ‘Should I stop doing this?’

And now, I definitely have a second wind to this.

If I was getting paid for it, I’d have doubts because the motivation would be different but I’m doing it because…I like playing my favorite music.

Andersen: You don’t get paid for this? Why do you do it?

Gerber: I like it. You get the bug. And it’s hard to describe the bug to people who aren’t in radio. In fact, I’ve gone out of my way to not make money just so I have a nice, clean conscience.

Andersen: Do you feel lucky?

Gerber: Oh, my God, I’m so thankful that KFAI and community radio as a whole exists and let me do what I do.

I adhere to FCC rules. I do well for pledge drives, and we bring in some nice money, and otherwise they leave me alone. I am the luckiest guy in the world.