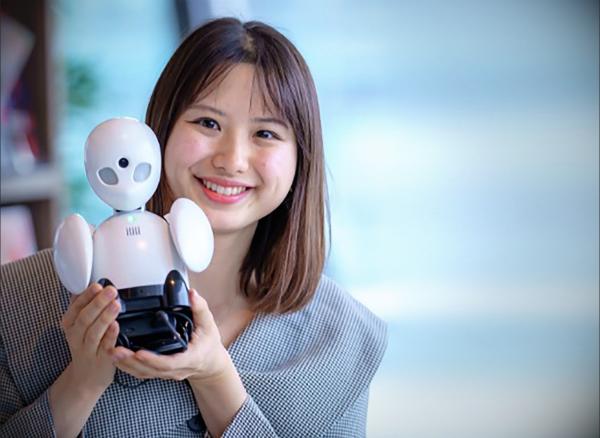 As societies around the world grapple with the coronavirus pandemic, service robots have emerged as a powerful tool in fighting the virus and addressing social needs. Sterilizing robots using ultraviolet light are disinfecting hospitals and airplanes, delivery robots are carrying out contactless deliveries, and avatar robots are even standing in for university students at graduation. Japan has long been a leading manufacturer of both industrial and service robots, and the pandemic is accelerating development of robots as a service (RaaS) that can both extend human abilities and relieve people of work that is exhausting and repetitive.

Avatar robots, sometimes known as telepresence robots, are an emerging field of service robots that allow users to remotely operate interactive machines and project their presence into a distant location. Ory Laboratories, a robotics startup in Tokyo, is building avatar robots that can benefit not only those working from home during the pandemic, but people with chronic health conditions that prevent them from leaving their home or care facility. OriHime Biz is a desktop communications robot that works via smartphone, tablet or PC. About 20 cm tall and equipped with a camera, microphone and speaker, OriHime has a sleek, streamlined design and can move its head and arms. Children with physical impairments have used OriHime to virtually attend class. In one instance, a teacher suffering from amyotrophic lateral sclerosis (ALS) used it to attend his students’ graduation ceremony.

“Since the pandemic, OriHime has been increasingly used for social distancing applications such as users who want to attend conferences in avatar form,” says Yuki Aki, COO and cofounder of Ory Laboratories. “It has also been used to greet COVID-19 patients recuperating in a hotel in Kanagawa Prefecture.”

Yuki’s background drives her passion for avatar robotics. As a student, she was diagnosed with tuberculosis and was unable to attend school, an experience that made her very lonely. It was through the Japan Science & Engineering Challenge (JSEC), a competition for young science enthusiasts where she won a prize, that Yuki met fellow prizewinner Yoshifuji Kentaro, now CEO of Ory. He told her about his idea to extend human abilities through robots, and after developing a prototype as college students, they set up Ory Laboratories in 2012.

“I wanted to solve the problem of solitude,” says Yuki. “The tool to accomplish that mission turned out to be a robot, but it could also be something completely different.”

The startup now has more than 20 employees, two types of robot and one service. Aside from OriHime Biz, it has developed OriHime D, a mobile robot that stands 120 cm tall, about the size of an elementary school student. Controlled by remote users, it can carry objects such as trays and drinks. OriHime eye, meanwhile, is an eye-tracking communications device for users such as ALS patients who can only move their eyes, fingers, or other body parts. It can be employed to communicate with loved ones or operate robots such as OriHime.

“OriHime D has been used as an avatar waiter in cafés we organize as temporary events, and by controlling it, users can experience what it’s like to work in the service industry,” says Yuki. “One man using it said he was able to earn money for the first time in his life, and decided to buy clothes for his mother, who cares for him because he cannot work.”

Ory Laboratories has collaborated with a regional government in Denmark to provide robots for use by children confined to their homes or in hospital. The company is now focused on expanding the use of its avatars and would like to work with other partners overseas.

“By 2050, we want to have robots for nursing care, for instance eye-controlled avatars that can help people care for themselves in their old age,” says Yuki. “You could take continuing education classes or attend school reunions via your robot. We envision a future world in which avatar robots are an extension of yourself and help you overcome the limitations of the physical body.”

Robot chefs to the rescue

Another Tokyo robotics startup that is expecting increasing demand, even during the pandemic, is Connected Robotics. Founded in 2014, it’s targeting an underserved but potentially huge market: automated food preparation, especially for Japanese cuisine. Its first robot is OctoChef, a machine that can prepare up to 96 takoyaki, a Japanese snack consisting of chopped octopus and other ingredients in a ball of batter. OctoChef can whip them up in 15 to 20 minutes using artificial intelligence, computer vision, and a collaborative robot arm.

“Japanese industry needs more workers but the labor market is shrinking and aging,” says CEO and founder Sawanobori Tetsuya. “We want to help by providing robots that can take over difficult cooking jobs, working long hours over a hotplate with temperatures of 200 C.”

Sawanobori was born into a family of restaurateurs and dreamed as a child of having his own eatery. But he was also attracted to robotics and computer science, subjects he studied in university. He gained some early momentum by winning top prize at Startup Weekend Robotics, and joining the Kirin Accelerator Program, sponsored by Kirin Holdings, owner of Kirin Brewery. Fast-forward to 2020, and Connected Robotics has installed a number of OctoChef machines around Japan. Earlier this year, it launched another robot that can make soba noodles. Restaurants that rent the machine can save 50% on labor costs for cooking soba noodles, according to the company.

“As collaborative robots that work alongside people, our machines can move smoothly, while being adaptive and flexible,” says Sawanobori. “This is especially important in confined spaces like restaurant kitchens. With our control technology and computer vision, we can achieve smooth, intelligent machines that can help get the job done.”

Connected Robotics has developed a number of other food-related robots, including a machine that produces soft-serve ice cream, another that prepares deep-fried foods often sold at Japanese convenience stores, and yet another that cooks bacon and eggs for breakfast. Along the way, it was selected for the Japanese government’s J-Startup program, which highlights promising startups in Japan, and has raised over 950 million yen ($9.1 million) from investors including Global Brain, Sony Innovation Fund and 500 Startups Japan.

Connected Robotics wants robots to do more than just prepare food in the kitchen. It is collaborating with the state-backed New Energy and Industrial Technology Development Organization (NEDO) to tackle the task of loading and unloading dishwashers. Under the project, one robot arm will prewash dishes and load them into a dishwashing machine, and another arm will store the clean dishes. The company aims to roll out the machine next spring, part of its goal to have 100 robot systems installed in Japan over the next two years. From that point, it wants to branch out overseas into regions such as Southeast Asia.

“I think we can be globally competitive because while there are some robots that can make hamburgers, spaghetti or pizza, so far there are no other companies that are serious about doing Japanese cuisine,” says Sawanobori. “We want to spread Japanese culture while showcasing our unique technologies and strengths.”

Note: All Japanese names in this article are given in the traditional Japanese order, with surname first.