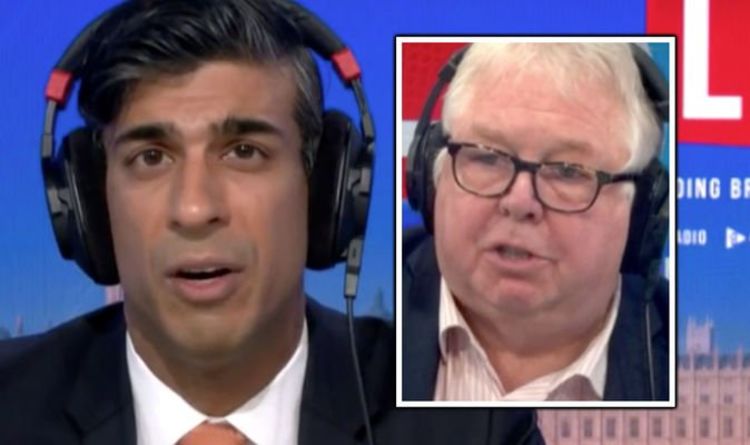 The LBC presenter confronted Chancellor Rishi Sunak with a recording of Excluded UK founder Annika Hicks breaking down in tears as she warned how the lack of Government support had been harming her community. Mr Ferrari demanded to know why three million people remain excluded from receiving state support despite Mr Sunak having had over eight months to create the appropriate schemes. The radio host said: “You will have heard of Excluded UK. Nobody expected you to get it right in March.

“You have been rushed in 1,000 miles an hour. Chancellor, respectfully, you’ve had eight months to redo the sums. Why are three million people still excluded?”

Mr Sunak dismissed claims millions of Britons have yet to receive help, saying: “You said at the beginning of the show that what we’ve spent is essentially more than anyone else has internationally.

“So the scale of the response we’ve put in place is extraordinarily comprehensive and generous by any international measure.”

The answer however appeared not to satisfy Mr Ferrari, who hit back: “But it doesn’t help them. I’m sorry, I hear that, but they still…it’s like you keep telling me how well you’ve done for those folks.

“Which is commendable, among the most generous in the whole of Europe, probably the best in much of Europe. But you still left three million people.

“Please, stop telling me how well you’ve done for next door when you’re not helping these people.”

The Chancellor said: “I respectfully disagree with the sense that three million people have not been able to access any help.

“Let’s just take one example of the people described to be in that group.

“It’s people who are not majority self-employed, which means they make the majority of their earnings from being employed. Those people will have benefitted from the furlough scheme.”

Asked about those people branding themselves as “excluded”, Mr Sunak told the Commons: “It is not a number that I recognise, and I do not think that it is right to describe those people as excluded, as 1.5million of those people are not majority self-employed; they are people who earn the majority of their income from being employed.

“That decision was taken to help target the support at those who really need it. We have heard a lot from Opposition Members about support being targeted, especially regarding the self-employment scheme.

He added: “Whether it’s loans, whether it is access to our more generous welfare system, or indeed mortgage holidays that one in six mortgage holders used in the end.

“These are all ways that we’ve tried to do our best to provide support to the largest number of people possible.”