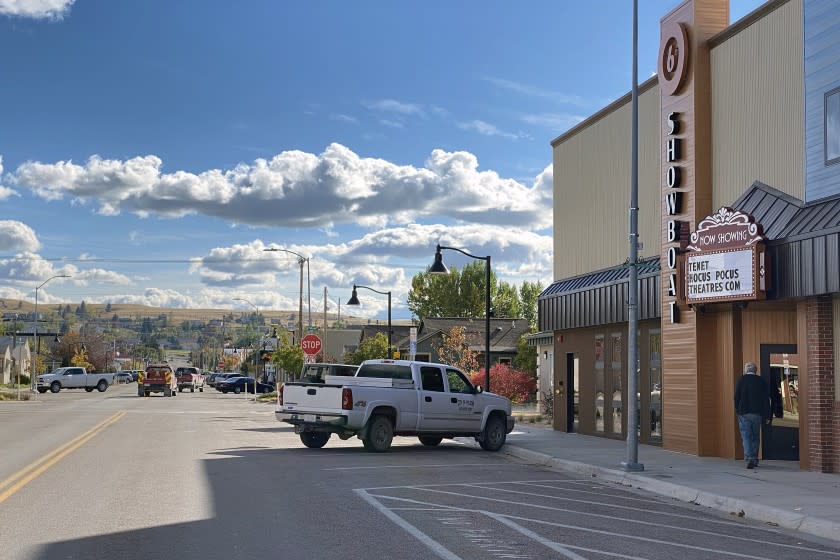 A chilly, early-morning wind was gusting off the water in this quiet lakeside town, and as I made my way across a deserted Main Street one day last week. the words of Clint Eastwood’s “Dirty Harry” Callahan flitted across my mind.

“You got to ask yourself one question. Do I feel lucky? Well do you punk?”

The truth is, I wasn’t sure.

Engaging in gunplay with a rogue police inspector was not on my agenda, but I was on a mission that felt equally risky: headed for the newly renovated Showboat Stadium 6 cinema in Polson (population: 4,488, per the last census), I was about to take my chances with taking in a film in an honest-to-God, bricks-and-mortar movie theater.

As a film critic for decades, going to theaters and screening rooms was something I did three or four times a week, sometimes multiple time a day. I’d anticipated a bit of a slowdown after stepping back from regular reviewing, but then COVID-19 hit in force, shutting movie houses nationwide, and what was a way of life for me disappeared in a trice.

Of course — like everyone I know — I compensated by streaming, lots of streaming. I saw TV series from all over, from turbulent Israel (“Shtisel,” “Fauda”) to cool Scandinavia (Norway’s “Occupied,” Sweden’s “The Restaurant.”). I took in feature films as well, including the exceptional “Hamilton” as well as “Mulan,” which whatever else you thought about it cried out for a bigger screen.

I even indulged in previously unheard-of pleasures, seeing spanking-new films streaming directly from festivals including the New York Film Festival and — my personal favorites — immaculately restored silents from the nonpareil Giornate del Cinema Muto in Pordenone, Italy. I should have been satisfied, but I wasn’t.

For though theaters in Los Angeles and New York remain closed, Montana’s are open, and the chance to see a film I was very much looking forward to — Christopher Nolan’s “Tenet” — while I was in the state was an experience I was reluctant to pass up. Especially when I learned that it was possible to rent one of the Showboat’s auditoriums for a reasonable amount for a morning show for just myself and my wife.

Still, given the risks for transmission in any public place, I was nervous, and the posters displayed outside the theater increased my sense of strangeness. One-sheets boldly announcing things like “Top Gun: Maverick … June 2020” seemed like relics from an alternate reality or maybe a vanished civilization — like glimpsing the half-buried Statue of Liberty in “Planet of the Apes.”

Talking to the Showboat’s knowledgeable manager, James Bauer, outfitted in a Superman mask, calmed me down. The Showboat is a participant in the National Assn. of Theater Owners’ nationwide CinemaSafe protocols, and it was oddly comforting to see a hand sanitizer dispenser kitty-corner from a Darth Vader statuette.

Still, even though the Showboat is the only movie theater open for 60 miles, and brand-spanking new to boot, Bauer said “It’s been hard. Hollywood companies are not releasing anything. People are saying, ‘We want to come, but there’s no movies. There’s nothing we want to see.’”

While designers of elaborate old-school movie palaces used to insist “the show starts on the sidewalk,” for me the show has always started with the trailers. When Bauer asked me if I wanted to see some ahead of “Tenet,” I did not hesitate.

But even with my lifelong passion for coming attractions, I was wholly unprepared for the jolt, the freight-train whoosh of adrenaline that barreled into me as trailers for “No Time to Die” (the James Bond extravaganza postponed to 2021), the Marvel Cinematic Universe’s “Black Widow” (also postponed), and even, heaven help me, a “recut and reimagined” “Cotton Club” flooded the theater.

Though I theoretically knew how starved I was for big-screen attractions, I hadn’t realized in my gut the real extent of that — how truly famished I was after half a year away.

I’ve been writing and talking for decades about how irreplaceable the big-screen experience is, and as the feature began and I greeted the Warner Bros. logo like an old friend, I realized I was now living proof of the fact.

“Tenet,” as it turns out, was a fine movie to see after not seeing a movie in a theater for what seemed like forever. Characterized in the press notes as a “sci-fi action spectacle,” it used familiar elements including an unflappable secret agent (John David Washington), an all-evil. all-the-time Russian billionaire (a convincing Kenneth Branagh) and a glacial blond Hitchcock would have envied (Elizabeth Debecki) to construct dazzling action tableaux that are a pleasure to lose yourself in even if you’re not always exactly sure what is going on.

As early as 2000’s “Memento” and very much including 2010’s “Inception,” writer-director Nolan has always enjoyed playing games with space and time, and with “Tenet,” he has created a supremely twisty film where the future has some nasty plans for today’s world, schemes that make nuclear war sound like a walk in the park.

Before we hear about those plans, the first of the film’s set pieces, a complex raid-within-a-raid taking place at the Kiev Opera House (doubled by a Tallin, Estonia structure) swiftly unfolds.

Like the ones still to come — including a crash of an actual 747 jumbo jet — that sequence is characterized by the physical as opposed to the CGI action Nolan prefers, and that physicality plays much more convincingly on a big theatrical screen than it might on smaller canvases.

More than that, upping the ante for himself, and viewers, Nolan posits that the future has figured out a way to invert time, to make it flow backwards as well as forwards, and he proceeds to show us exactly what that means in a kind of Alice in Wonderland way.

Even as I was enjoying the elaborate action, however, the critic in me was becoming aware both that the plot, though clear overall, was harder to follow moment to moment than I would have liked, and that emotional connections between the characters was not a strength.

But like a dieter splurging on a hot-fudge sundae, I told myself those considerations could wait. Film and filmgoing do not exist in a vacuum, every movie experience is colored by the situation surrounding it, and enjoying “Tenet” for the one-off experience it may prove to be was paramount in my mind.

I’m back in Los Angeles now, where theaters remain closed for the foreseeable future, and the long-term viability of the exhibition business is a serious industrywide concern. Even if theaters reopen, I doubt I will decide to rent one on a regular basis just to keep my nerves calm. (Though that James Bond trailer certainly whetted my appetite.)

Another poster outside the Showboat, for the animated sequel “The Croods: A New Age,” proclaimed “The Future Ain’t What It Used To Be.” Even if those words turn out to be prophetic, I came out of my “Tenet” screening more convinced than ever that in one form or another, one way or another, the big screen has the power to endure. For now, though, echoing “Casablanca,” my wife and I can look at each other, say “We’ll always have Polson,” and smile.